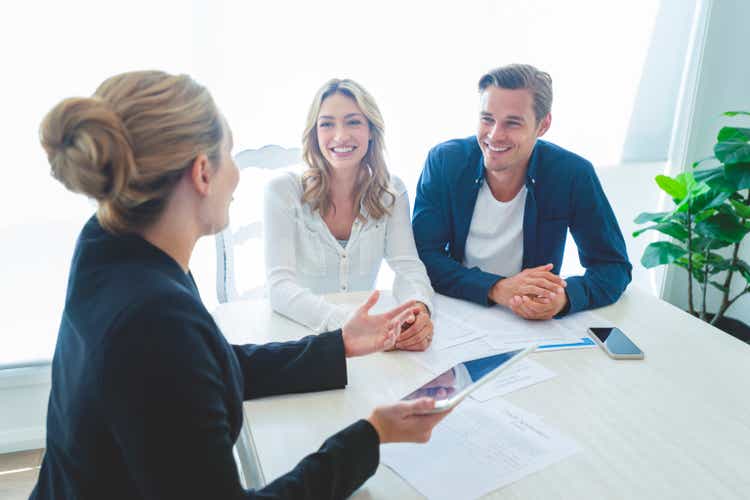 eXp World Holdings Inc. (NASDAQ:EXPI) is a cloud-based residential real estate brokerage platform. The attraction here is a low-cost technology-based solution that offers an alternative for independent agents and broker teams with a compelling commission draw compared to legacy brick-and-mortar companies. While eXp went through a boom during the pandemic, shares have been highly volatile over the past year against concerns regarding the housing market momentum and the overall economy.

Indeed, we last covered the stock with an article back in 2020 ahead of what was an impressive rally that ended up reversing amid the broader selloff in high-growth tech names. A lot has changed over the period but our message here is that the long-term outlook and bullish case for eXp remain in place. Our follow-up coverage today recaps the latest quarterly report which beat expectations confirming the underlying strength of the business model. We believe the current level represents a new buying opportunity with compelling value for a category leader that is supported by overall solid fundamentals.

The company reported its Q1 earnings on May 2, with GAAP EPS of $0.06 which was $0.05 above the consensus estimate. Revenue reached $1 billion for the first time, climbing 73% year over year and also $57 million ahead of expectations.

While EPS this quarter doubled from $0.03 in Q1 2021 with a net income of $8.9 million, much of that was based on a larger tax provision benefit. On a comparable basis, adjusted EBITDA increased 19% y/y to $17.7 million. This considers a narrower margin this quarter which was pressured by higher general and administrative expenses put in place to support an ongoing international operation. The understanding is that the company will capture some scale benefits going forward with upside to margins adding to profitability.

This was a record quarter for the company which now counts +78k agents on the platform, a figure climbing 55% from the period last year. Similarly, the number of real estate transactions closed increased by 55% to 114k which implies the ratio of deals per agent has been stable. More favorably, the dollar volume of real estate transactions increased 69% to $41.4 billion. This metric above the number of deals reflects the higher market pricing of homes consistent with market trends.

Developments in the quarter include an ongoing expansion into new markets, launching in New Zealand, Chile, and Dubai, and United Arab Emirates. Again, this is part of the growth strategy as eXp consolidates its market leadership as the premier virtual brokerage. For context, entering a new market typically entails required jurisdictional licensing and regulatory steps which typically add startup costs at the corporate level and explain some of the higher expenses.

Finally, the company ended the quarter with $130 million in cash with zero financial debt. The balance sheet position is a positive in the company’s investment profile and supported by underlying positive cash flows. Keep in mind that EXPI pays a quarterly dividend of $0.04 since last year which currently yields 0.9% on a forward basis.

The company also added $100 million to its stock repurchase program authorization up to a total of $500 million. The plan is to repurchase up to $20 million in shares per month, up from $10 million previously. This is a significant amount considering the stock’s current market value of $2.2 billion. With the dividend and buybacks, we calculate a total shareholder yield near 12% on a forward basis.

Is EXPI A Good Long-Term Investment?

It’s easy to get caught up in the stock price decline with shares of EXPI down by more than 75% from their high in 2021. Our take is that the stock’s valuation at the peak last year reached an extreme level that was likely based on some exuberance. There are plenty of headwinds at play that has added to near-term uncertainty for residential housing which is the key exposure for the brokerage business. Signs of slowing economic growth, record inflation squeezing consumer spending, and the surge in mortgage rates this year have all pressured sentiment towards the stock.

At the same time, long-term investors can take solace that EXPI has returned over 700% in the last five years highlighting what has been a transformational growth story. The trends from this past Q1 suggest the company is operationally and financially doing just fine.

Going through the core metrics, what makes eXp interesting is that the climbing agent count adds a natural growth runway. In other words, it’s expected that the increasing number of agents and brokers on the platform will continue to bring in new deals with a higher unit and dollar volume level of transactions corresponding to firm-wide revenue. The result is that even if the pace of home price increases pullback from record highs, more eXp agents will add to transaction levels mitigating the macro volatility.

While the U.S. is currently the largest market for the company, representing nearly 90% of total revenue in Q1, the bullish case for the stock is that the success can and will be replicated in international markets at a similar penetration level. As the “fastest-growing real estate brokerage”, according to the company, eXp is essentially capturing market share from traditional players which we expect to continue.

A goal of the company is to reach 100k agents, representing another 28% from the current level. The way we see it playing out is that the top-performing eXp agents will become more efficient and build out larger teams translating to higher deals per agent ratio which flow into increasing firm-wide profitability.

While management does not provide earnings guidance, consensus estimates project 2022 revenue growth at 42% to $5.3 billion while EPS reaches $0.57. For 2023, the expectation is for EPS to accelerate towards $1.00 as the larger global scale is leveraged to generate higher margins. We see upside on the earnings side with a sense that the market is underestimating the underlying profitability of the business model.

As it relates to valuation, we believe the forward P/E of 25x and even 15x on the consensus EPS for next year in 2023 are attractive considering the current growth trends. Notably, EXPI at an EV to forward revenue multiple of 0.4x trades at a discount to other “real estate tech” names like Opendoor Technologies Inc (OPEN), Zillow Group Inc (Z) at 1.4x, online mortgage-lender Rocket Companies Inc (RKT) at 2.1x, and SmartRent Inc (SMRT) at 3.9x.

While all of these companies focus on different segments with unrelated business models, the comparison here is fair as they all have exposure to trends in the residential housing market. The distinction of EXPI is that the company is among the few that are currently profitable and the only real-estate tech name that pays a dividend. EXPI also stands out as being more diversified globally with its early stage of operation in several new countries. We make the case that EXPI is undervalued with the strongest fundamentals in the group and deserves a larger valuation premium.

There’s a lot to like about the eXp business model that has already proven to be a disruptor to the real estate brokerage industry while at the same time still in the early stages of its potential. We rate shares of EXPI as a buy with a price target of $20.00, representing a 36x multiple on the current 2022 consensus EPS or 20x on the 2023 EPS estimate of $1.00. The recent selloff in the stock provides an attractive entry point for a new position. Our thinking here is that getting through the next few quarters, continued earnings momentum will make the stock appear increasingly cheap.

In the near term, better than expected macro data with signs of inflation peaking, and resilient trends in economic growth along with the housing market can add momentum to the stock. Longer-term, the advantages for independent agents to join the platform with access to the best technology, a more favorable commission split, and even equity incentives on EXPI stock should continue to allow the company to capture market share as a core part of the bullish thesis.

The key risk to watch would be a more concerning deeper deterioration of the economic outlook. A sharper decline in housing prices possibly based on an accelerated increase in mortgage rates or a weaker growth outlook in the United States overall would keep shares volatile. Disappointing earnings over the next few quarters can open the stock for another leg lower. For EXPI it will be important to continue growing the agent base and generating positive cash flows.